The history of the Department dates back to July 7, 1958, when the Department of Mining Automation and Telemechanics was founded at the Kharkiv Mining Institute.

The first Head of the Department is Evtihii Yakovych Ivanchenko.

Evtihii Yakovych studied at the Craft College (Zaporizhzhya), graduated from the Rabfak, after which he continued his education at the Dnipropetrovsk Mining Institute at the Electrotechnical Department. That is the place where he began his scientific work. For a major contribution to the development of the mining industry in 1935. He was awarded the Scientific Degree of the Candidate of Technical Sciences and the Academician Rank of Associate Professor without the defense of the Dissertation. Then there was a war, evacuation and return to his hometown. He successfully defended his Doctoral Dissertation and received a Degree of Doctor of Technical Science and a Professor’s degree in 1948. He headed the Department of Mining Electrical Engineering in 1954.

The activity of Evtihii Yakovych as the Head of scientifically research works gave a new impulse this to the direction of the University’s activity. During the first three years of work at the Kharkiv Mining Institute (1954-1957), the volume of pre-contractual subjects grew to 3.5 million rubles. On the initiative of the Professor, the Ministry of Coal Industry of the Ukrainian SSR opened several research laboratories at the Kharkiv Mining Institute. The work of these laboratories has greatly enhanced the quality of the educational process.

E.Y. Ivanchenko worked as the Head of the Department until 1973, after what he had been a Professor Consultant until the end of his life. The Scientist died in 1980.

E.Y. Ivanchenko was repeatedly awarded with Government Awards and Honorary Signs for great achievements in the production and scientific activities: the Sign «Excellent Officer of the Ministry of Coal Industry» and the Order of the Red Flag of Labor (for training) in 1948; the Medal «For Valiant Labor» and the Second Order of the Labor Red Flag (work experience) in 1949; the Personal Rank of the Mountain General Director of the III Rank in 1953; the «Miner’s Glory» Mark of the II Degree in 1959; In 1975 – the Medal «30 Anniversary of Victory in the Second Great World War».

Professor Ivanchenko trained many postgraduates and Candidates of Technical Sciences during his scientific career and he had over 55 scientific works.

When in 1963 the Kharkov Institute of Mining Machinery, Automation and Computer Engineering (KhIMMACE) was founded on the basis of the KhMI, changes in the educational and scientific directions of the educational directions respectively affected the further activity of the Department: by the Rector’s order number 62 (20 of February 1963) the Department of Automation and Telemechanics was created.

Sviridov became a student of the Electromechanical Faculty of the Kharkiv Mining Institute in 1954. His excellent training, successful scientific work in the scientific group of Professor E.Y. Ivanchenko, brilliant defense of the Diploma project in 1959 (the project of a mining engineer of automation electromechanics) was crowned with an invitation to work at the Department of Automation and Telemechanics. After graduating from the postgraduate studies in 1964, V.V. Sviridov defended his Ph.D. in advance, and he defended his Doctoral Dissertation in 1973.

Valentin Viktorovych had been achieving all the scientific and educational positions from a Junior Researcher to a Professor during the work at the Institute. He became the Director of the Department of the Automated Control System in 1973, the Dean of the Control System Faculty. He was the Secretary of the Party Committee of the Institute in 1978, and in January of 1984, he was appointed on the Rector’s position of the KhIRE and the Director of the Rector’s Council, the General Director of the Scientific and Educational Manufacturing Association «Delta» at the KhIRE.

V.V. Sviridov took a scholarly internship in France. He was a participant of science trips to Yugoslavia, Great Britain and other countries, where he lectured on courses related to new information technologies. Valentin Viktorovych actively worked in all spheres of the University’s activity. He was responsible and creative in the execution of the assignment. He had always been able to mobilize the team when solving problems. He was distinguished with a high level of professionalism, the ability to quickly assess the situation, to generalize information, to make extraordinary decisions if it was necessary.

V.V. Sviridov headed the most important scientific and economic work on the creation of operational control systems of production, components of the Unified Automated Warning System and Tsunami Alert, specialized systems for the control and diagnosis of diesel-electric units and a lot of others. He trained 6 Doctors and more than 40 PhDs.

V.V. Sviridov is the author of monographs and manuals and over 200 scientific works. He was the Director of the Specialized Councils for the defense of Doctoral and Candidate Dissertations, a member of the Editorial Board of the collection “Automated Control Systems and Automation Devices”.

Valentin V. Sviridov was elected an Academician of the Engineering Academy of Ukraine in 1992 in the Speciality “Information Systems, Computing and Electronic Engineering, Communication and Telecommunication Systems, Metrology and Device Making”, as well as an Academician of the Academy of Sciences of Applied Radio Electronics of Belarus, Russia and Ukraine.

Valentin Viktorovych was a wonderful athlete who played in the city volleyball team of Kharkiv with famous Ukrainian volleyball players in competitions of a rather high level.

The merits of V.V. Sviridov in the improvement of the educational process, the restructuring of higher education and the improvement of the material and technical base were repeatedly noted by the leadership of the Ministry of Higher Education of the Ukrainian SSR. He was awarded the honorary rank of “Honored Worker of the Higher School of Ukraine”. Valentin Victorovych was the Director of the Council of Rectors of Higher Educational Institutions in Kharkiv, Vice-President of the Council of Rectors of Ukraine, had government awards (the Order of Friendship of the Nations, medals). 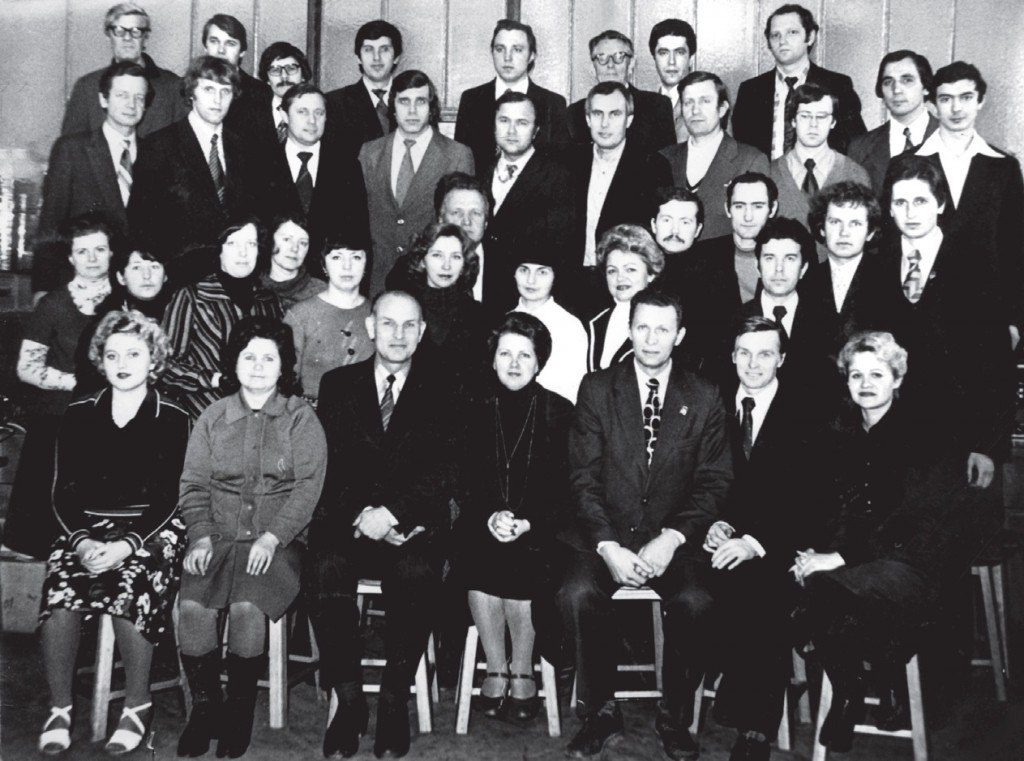 Employees of the Department of Automated Control Systems. 1981

The participation of V.V. Sviridov contributed to the development and consolidation of traditions, which were laid in the early years of the Department existence; in the first place, it was a close connection and continuity of generations. Here is a remarkable example: among more than 40 Candidates and 6 Doctors of Sciences, prepared by Valentin Viktorovych, the current staff of the Department:

Teachers: V.I. Sayenko, N.V. Vasyltsova, A.V. Mikhnova, D.K. Mikhnov,  O.E. Neumyvakina and, above all, Viktor Makarovych Levykin, who literally picked up the baton from V.V. Sviridov and became the Dean of the Department in a difficult period of 1994. 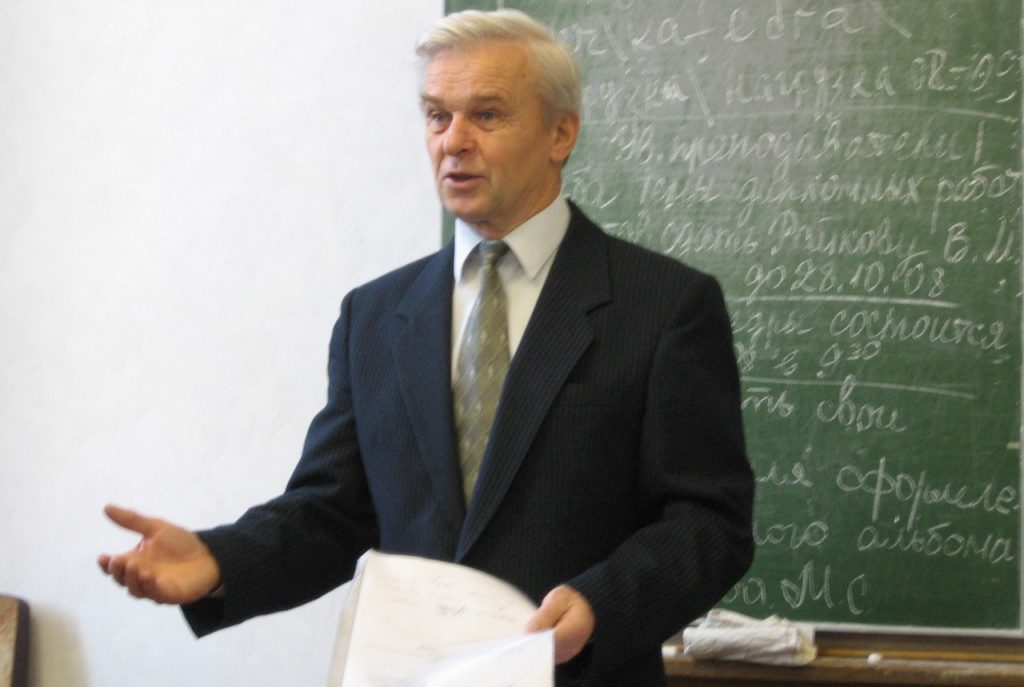 Before education y in KhIRE Victor Makarovych Levykin served in the Naval Forces of the Pacific Fleet. he was the Lenin Scholarship and in 1970 he graduated with honors from the Kharkiv Institute of Radio Electronics and began to work as a Junior Researcher at the Department of Automated Systems, in 1972, he entered the postgraduate study.

After defense in the Candidate’s Dissertation in 1974, Victor Makarovych began to work as an Assistant of the Department of the Automated Control System, he was a Senior Lecturer from 1977, and he received the title of Docent in 1979.

For seven years V.M. Levykin had been the Director of the Trade Union Committee of KhIRE, in 1992-1999 he worked as a Dean of the Faculty of Foreign Citizens Training.

Victor Makarovych defended his Doctoral Dissertation in 1996, in the same year he received the rank of Professor, he headed the Institute of Computer and Information Technologies in 1999-2005.

Professor Levykin developed a new scientific direction on the problem of creating formalized system analysis tools that allow categorically-functor levels to describe the process of designing complex information systems, as well as their structure and condition. He manages research in the field of theoretical and methodological foundations for the creation of complex computerized integrated systems, the description of complex systems and the integration of their elements, the creation of automated tools for supporting control decisions, automated cost management systems, adaptive integrated enterprise control systems, principles of designing information and control systems etc. During his scientific career, Viktor Makarovich is responsible for the control of research work carried out at the request of the Ministry of Education and Science of Ukraine, the Ministry of Emergency Situations, the Kharkiv Regional State Administration in the field of development of distributed logistics computerized systems of organizational and technological control, emergency systems of analytical systems, etc. Viktor Makarovych was Director of the Constructor of the Information and Analytical System “University”.

Since 2002 Viktor Makarovych Levykin is an Academician of the Academy of Sciences of Applied Radio Technics of Belarus, Russia and Ukraine. He is the author of more than 400 scientific works, including 2 author’s Certificates, as well as he is a co-author of the textbook and 13 manuals; He trained 4 Doctors and 25 Candidates of Sciences.

Victor Makarovych was awarded the medals “For Labor Valor”, “Veteran of Labor”, Anniversary Medal “100 years since the birth of V.I. Lenin 1870-1970 “, the breastplate of the All-Union Central Social-Democratic Labor Party “For Active Work in the Trade Union”, the Diploma of the Ministry of Education and Science of Ukraine, the sign “Excellence in the Education of Ukraine”. He received a Diploma in 1999, and in 2004 took first place in the regional competition “Higher School of the Kharkiv Region, the best names” in the nomination “The Best Director of the Department”. Such a high rating was given to the Director and his Department, which is one of the leading in Specialists training in the Speciality “ISC”.